Many countries have different ways of seeing in the new year (and yes that IS a phrasal verb). 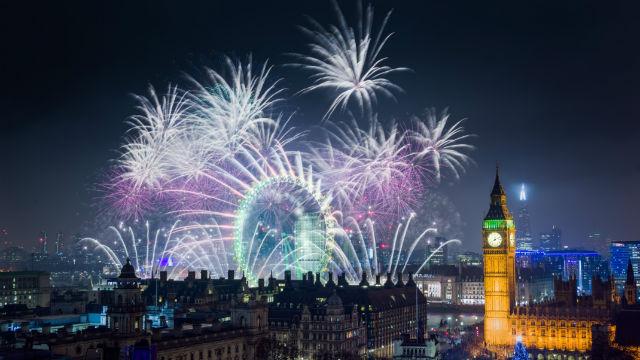 Fireworks seem to be the most universal way of welcoming in a new 365-day cycle (or 366-day cycle as it is this year, which happens to be a leap year).

Some kind of party or gathering usually accompanies the arrival of a new year, sometimes with special songs or dances. Many countries follow a ritual of eating certain food for good luck, such as the twelve grapes here in Spain, lentils in Italy or noodles in Japan.

In Britain, our New Year food mainly consists of bowls of crisps and sandwiches, washed down with (phrasal verb number two, if you're counting) generous helpings of alcohol.

Nonetheless, one tradition of this season we in the UK do share with many other countries is that of making New Year's Resolutions, a list of positive proposals for the year ahead.

You know how it goes: join a gym, learn a language, get fit, lose weight, quit smoking, stop drinking, cut down on the red meat (phrasal verb number three there) or go vegetarian or vegan, recycle more, use less plastics, spend less, save more, pay off debts, etc, etc, etc. The ancient Babylonians are to blame for all this, and even they asked the gods to help them pay off their debts. So much for originality.

However, Babylonian New Year was some time in March and it was the Roman Emperor Julius Caesar who, in the year we now call 46 BC but which then must have been called something else, changed the start of the year to January (after Janus, the two-faced god who looked back on the past and forward to the future) and somehow convinced the Romans to make offerings to the God of the Month and also to make promises to be better citizens for the next twelve months.

Many years later, in the mid-1800s, John Wesley, founder of the Methodist church, created a holiday called the Covenant Renewal Service, which included making promises for the coming year, which is still observed in some Protestant denominations today.
The phrase “New Year's Resolutions” first appeared in a Boston newspaper in 1813, where the writer claimed that "multitudes of people, accustomed to receive injunctions of new year resolutions... will sin all the month of December, with a serious determination of beginning the new year with new resolutions and new behaviour".

Not unlike those of us who swear to lose weight or stop drinking in January, but not before they have stuffed themselves with food and festive libations at Christmas.
But, as noble as it may be to aim to lose weight, live a healthier life, save money and be kind to our fellow man - including that annoying old guy who lives in the flat downstairs - can we reasonably expect to keep our New Year's Resolutions? How many gym membership subscriptions are forgotten by March or earlier? According to recent surveys, up to 80% of these well-meaning promises don't make it past MID-FEBRUARY. In fact, some Americans have declared January 17th the day we should all ditch our New Year's Resolutions.

Maybe we should stop aiming so high and rather than demanding we live out a monastic, almost masochistic ritual of puritanical self-cleansing, we should try to change ourselves by addressing one thing at a time.

For example, rather than vowing to master Mandarin Chinese in a year or hit C2 level English before next Christmas, how about just making listening to English (through podcasts, Netflix or English-language radio) part of your everyday life and really opening your ear to the language? Or checking your persistent English mistakes (with prepositions, for example) now and again?