I arrived to Barcelona about six months ago with no conception of what would quickly become my biggest nightmare for the following months, the NIE. Standing for Número de Identidad de Extranjero, the NIE, is a green piece of paper that allows you to do anything in Spain including the most basic need of all, getting a job. The funny thing about this document is that in order to get it, you need to have a job offer, but in order to be hired most employers require you to already have a NIE. See the conundrum?

I started doing what every poor soul who has no clue about something would do in my position, I googled it. The suggestions appearing on the pages included a wide number of lawyer firms that for the discrete amount of 200 euro would “get the earliest appointment” for you. Being broke with no money to waste, I decided to go the old fashioned way and “do it myself”. How hard could it be? I thought…

I decided to go the foreign police office, the Extranjeria (Rambla de Guipúscoa, 74) and find out what I needed, to get that piece of paper. I soon enough met a number of foreigners, that just like me, were standing on the other side of the street waiting for the doors to open, as the police had “kindly" told us to leave the front part of the station because of “security reasons”. At 9 am, after waiting for about an hour, the group of foreigners, including me, had to sprint on the other side of the street to get first to the doors and form a line.

After another hour of waiting I was let in the entrance where a pre-selection takes place. The police officer skims through the people in line and asks for various documents, including the most valuable one (200 euro worth according to the lawyer agencies) an appointment for the Extranjeria, the so called Cita Previa. Not having this document, I was rejected from the line but managed to acquire some important piece of information. There are two ways of obtaining the NIE:

1. Having a pre-contract or even better a work contract that provides all of your info and states the start date of your employment.

PRIVATE INSURANCE AND PROOF OF MONEY

2. Prove that on your bank account you have more than 5500 euro (no other currency) that is not older than 6 months. In addition, prove you have a Spanish private insurance that ensures you do not have to pay extra for any treatment at a Spanish hospital (sin copago). The insurance has to provide a document where they state that your insurance is sin copago.

In addition to the above documents, you need to bring your passport and have the proof of the cita previa.

How to get your cita previa

By this time I thought I had figured it all out. I was wrong. The police had told me that in order to get an appointment you should go on this website —> https://sede.administracionespublicas.gob.es/icpplus/ (it marks it as an unsafe website so you have to click on advanced options). 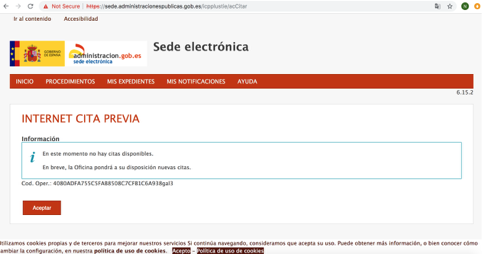 99.9% of the time when you will ask for an appointment (some people told me to wake up at 5am on Mondays, didn’t work) this lovely message will pop up.

What the police officer also told me was to go outside of Barcelona. However, the only place I could find an  appointment was in Lleida, a couple of stops with the fast train ride towards Madrid (the AVE). Still, I thought that it would be cheaper than getting a lawyer to secure an appointment for me. I headed to Lleida, where once again I was rejected, as it is not within the region of Barcelona.

How to get the NIE

Unfortunately, I would like to tell you I cracked the code to the system. I did not. I found a temporary job in one of the international companies for expats here in Barcelona that allowed me to have that document in a week.

If you are lucky enough to be in that 0.1% of people who get their appointment online and you have the documents described above you will get your NIE. This is how it should work.

However, to get appointments, most of the people I know have paid lawyer firms, which seems to be a borderline fraudulent activity. All the lawyers firms have secured appointments in bulks (which they agree on with the police in advance). This, in my opinion, is ILLEGAL  and should be hindered in any possible way. People should be able to get appointments at the police station without having to pay great sums of money to lawyers. It is highly unacceptable.

On my side, I wrote this post because I was highly aggravated by what was happening and to provide a little bit of clarity for people going through this process.

I will try to bring this up to some local syndicate (I heard about from my Catalan flatmate, who was shocked by this) but will not let this matter go. It is impossible for fellow foreigners like me to have to go through such an intricate system and be scammed by these firms to get a police appointment. UNACCEPTABLE.

WHAT CAN WE DO?

I am thinking that signing a petition could be the first step to showing how much, foreigners like me have suffered to get through this process.