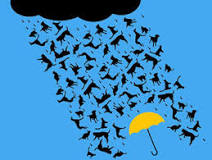 Raining cats and dogs
Idioms are figures of speech that become fixed in a language. Usually, an idiom is figurative in modern contexts but once had a literal meaning. These literal meanings, or idiom origins, can help a learner of English to understand where a phrase originated Why do idioms exist?
An idiom is an expression with a figurative meaning that differs from the literal meaning. We hear idioms every day – both in conversation and in the media. Used correctly, idioms can amplify messages in a way that draws readers in and helps to use the language at a natural way. Sounds more native.
Can it rain cats and dogs?
Of course not, it only enforces the heavy rain. The intensity of the rain.
Is raining cats and dogs a metaphor?
The statement "It's raining cats and dogs" is not a metaphor, which is a comparison of two unlike things. Instead, the phrase is an idiom,...
Where did they come from?
Idioms are usually derived from local culture and customs in each individual language. So, lets explore some common idioms and phrases and take a look at the meanings and origins behind them.
Some commonly used idioms in English:
And their origins:
It is a piece of cake:
Something easily accomplished, as in I had no trouble finding your house—a piece of cake. This expression originated in the Royal Air Force in the late 1930s for an easy mission, and the precise reference is as mysterious as that of the simile easy as pie.
Kill two birds with one stone:
It is to be believed that the phrase was originated from the story of Daedalus and Icarus from Greek Mythology. Daedalus killed two birds with one stone in order to get the feathers of the birds and make the wings. The father and son who escaped from the Labyrinth on Crete by making wings and flying out.
Let the cat out of the dog:
Supposedly, merchants would sell customers live piglets and, after putting a pig in a sack for easier transport, would sometimes swap the pig for a cat when the customer looked away. The buyer wouldn't discover they'd been cheated until they got home and literally let the cat out of the bag.
Why do the English use idioms?
An idiom is a phrase or saying that is commonly used in everyday English to express certain ideas or opinions. Understanding English idioms is important because they require a deeper familiarity of the English language to comprehend what someone means when they use them in conversation.
How many idioms are there in English?
There are a large number of Idioms, and they are used very commonly in all languages. There are estimated to be at least 25,000 idiomatic expressions in the English language.